No time to wait: evaluating the fight against ‘Drugmageddon’

This week, the UK’s Chief Medical Officer, Sally Davies, called for an Extinction Rebellion-style campaign to raise awareness of antimicrobial resistance (AMR). This followed a breakthrough report published by the UN’s Interagency Coordination Group on Antimicrobial Resistance (IACG) which emphasised that AMR is a global crisis that has the potential to reverse a century of progress in public health and might have a disastrous impact within a generation unless urgent action is taken. 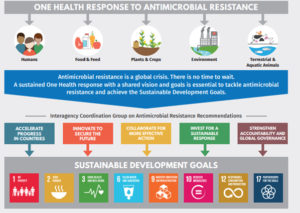 One Health, IACG recommendations and the Sustainable Development Goals

Drug-resistant diseases already cause at least 700,000 deaths globally a year, including 230,000 deaths from multidrug-resistant tuberculosis, a figure that could increase (under the most alarming scenarios) to 10 million deaths globally per year by 2050 without an urgent and substantial effort to contain AMR. Because the drivers of AMR lie in humans, animals, plants, food and the environment, a sustained and global ‘One Health’ response is essential to engage and unite all stakeholders around a shared vision and goals. The IACG report underlines the importance of the Global Action Plan on AMR adopted by the World Health Assembly in Geneva in May 2015, which has been translated into multiple national action plans. While plans might exist on paper, however, the real challenge lies in translating plans into sustainable responses at country level.

Through the Fleming Fund, the UK government has made combating AMR a central pillar of its Global Health Security Agenda. The Fund, overseen by the Department of Health and Social Care, is a significant £265 million investment over five years to tackle AMR in 24 low- and middle-income countries. Its focus is on strengthening AMR surveillance systems, across human and animal health at country and regional level to generate relevant data on AMR (as well as on antimicrobial use and consumption) that is shared nationally and globally, and which in turn results in measurable changes in practice and policy around the use of antimicrobials. The premise being that until laboratories around the world have the diagnostic capacity to detect and measure resistance, decision-makers will not have the evidence needed to respond to what IACG Director Haileyesus Getahun describes as the AMR ‘silent tsunami’.

As evaluation supplier for the Fleming Fund, one of Itad’s roles is to assess the Fund’s plausible contribution to changes in policy, regulations, attitude and practice around the use of antibiotics, through the generation of more and higher quality data on AMR. Clearly, this is not an automatic process. Generating more and better data does not necessarily mean this data will be shared, read or used, that its implications will be easily understood, or that the issue will be prioritised amongst the plethora of other national goals and priorities. As we have learnt from other evaluations, the impact pathway between evidence and policy change is context-driven, but there are clear mechanisms that underpin evidence-informed policymaking. Ensuring civil servants have access to more and better data, as well as the necessary skills to interpret such data and weigh up which evidence sources are most reliable is important but won’t alone result in policy change if there is no political space to bring evidence into decision-making, and no incentives for senior decision-makers to care about that evidence.

It is clear that a critical measure of success in the fight against ‘drug-mageddon’ will be effective coherence and alignment of global efforts across all five of the AMR GAP strategic objectives (including increased awareness, strengthened knowledge, reduced incidence of infection, optimised use of antibiotics and an economic case for sustainable investment). There is clearly an urgent need to shape the global AMR agenda to stimulate the generation of evidence and support its translation and dissemination into policy change and effective interventions. We hope that robust evaluation and adaptive management approaches which foster thinking around how and why policy change happens will support an effectively implemented and joined-up agenda to combat a global AMR emergency akin to a ‘climate emergency’.