Champion building for advocacy: what is it and when to use it?

Champion building seeks to identify and empower individuals to act as advocates for change. Our new blog series asks the key question: what makes a good champion?

Champion building is a key tactic many organisations employ in their advocacy work. It is a broad topic and closely related to leadership development, promoting advocacy through key individuals. However, there is a notable literature gap around the effectiveness and use of champion building.

In early 2020, we were commissioned by the Bill & Melinda Gates foundation to address this gap and conduct research around the wider experience of champion building in development and what generalisable lessons can be drawn from.

Read the full report: Champions for life: How to identify, support, and evaluate advocates for social change 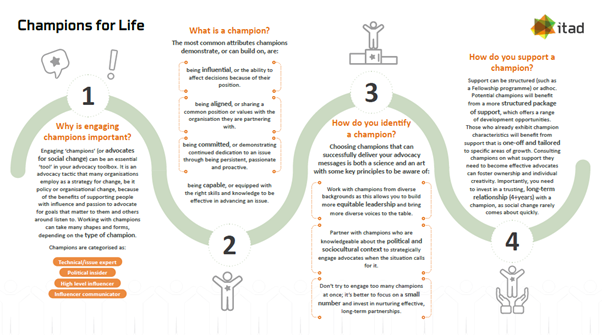 Our first task was to differentiate between champion building and wider advocacy initiatives involving influential people. We agreed that an initiative only relates to champion building if it has a clear strategy and expectation that the people engaged will become advocates through the process.

We then set out to explore what we mean by a champion and how best to support them.

Our research focused on four aspects of champion building:

Champion building can be about more than simply identifying people who are already influential. We were particularly excited to explore the process of building champions from ground up.

Establishing a common vocabulary: what makes a champion?

It is critical to agree on a common terminology when talking about champions as this has implications on the approach you take to engage and support them.

For this research, we defined a champion as an individual who is influential, aligned, committed, and capable in advancing an issue or set of issues and who demonstrates their commitment through action. The term ‘champion’ should be reserved for someone who exhibits these characteristics.

Those who do not currently exhibit champion characteristics (even if they are perceived as having the potential to do so) would be better referred to as ‘potential’ or ‘emerging’ champions. The suggested categorisation below creates a framework that can be used through the different stages of champion building, from identifying potential champions to monitoring and evaluating their effectiveness for advocacy.

Potential champions who do not already exhibit the characteristics discussed above must be judged to some extent on their potential. One interviewee described recognising potential as both a “science and an art” and that unexpected champions can emerge in unpredictable ways due to unusual circumstances. In assessing potential champions, it is important to gather, and make sense of, good intelligence, but there will also be an element of judgement involved.

The hope is that an integrated approach that uses the same key champion characteristics as selection and measurement criteria will allow us to track progress in a champion’s development journey and identify areas for improvement, a topic we will explore further in this blog series.

Existing literature does not offer much in the way of a typology framework. Examples of champions (e.g., celebrities) are typically identified and listed, but there is no attempt to construct a detailed classification. In our research, we proposed four broad categories of advocates, who share similar sources of influence and who, we believe, best encompass all the various examples we came across. 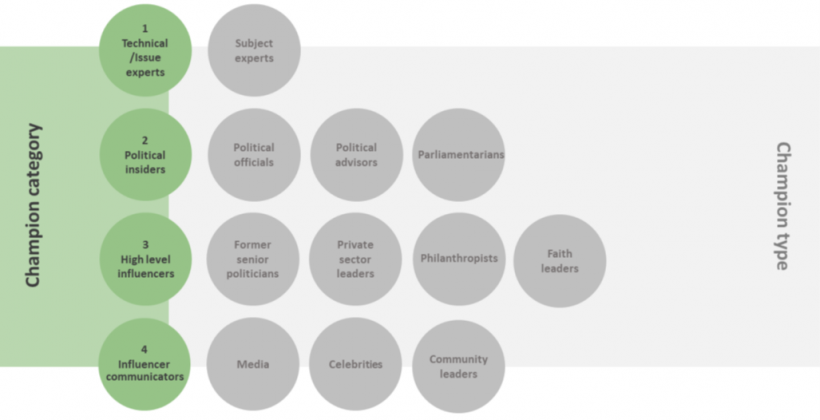 What became clear to us immediately was that there was a broad distinction between ‘public facing’ champions such as celebrities and faith leaders, and ‘insider’ influencers such as Parliamentarians or subject experts, pointing to the breadth of advocacy efforts from shifting public attitudes to directly putting pressure on policy makers.

Understanding what makes someone a successful advocate and helping them through that process is important for donors funding advocacy activities as well as practitioners implementing advocacy initiatives. We also hope that the collated learning from this research will contribute a public good to the advocacy field where such lessons are often fragmented and not widely shared.

We hope this first blog of the series made you curious about the vast world of engaging with champions as a strategy for change.

Read the second blog in the series exploring how to identify the right champion for your objectives: Champion building: identifying the best people for your advocacy programme

We are collating and presenting learnings from literature and practice of champion building to contribute to the wider field of advocacy and...

Champion building: identifying the best people for your advocacy programme

The second blog in our champion building for advocacy series explores identifying champions in different contexts for successful, adaptive...

Champions for life: How to identify, support, and evaluate advocates for social change

‘Champion building’ is a key advocacy tactic that many organizations including the Bill & Melinda Gates Foundation (BMGF) employ in their...