Learning how to create a culture of learning

When we evaluated how the Norwegian Aid Administration practised Results-Based Management (RBM) earlier this year, one of our main conclusions was that the Ministry of Foreign Affairs (MFA) and Norad didn’t have a learning culture.

When we evaluated how the Norwegian Aid Administration practised Results-Based Management (RBM) earlier this year, one of our main conclusions was that the Ministry of Foreign Affairs (MFA) and Norad didn’t have a learning culture.  We found some parts of the administration learning from evidence, but these were isolated examples. Evidence-based learning was not the norm.

However, the problem with talking about organisational culture – and recommending to a client that it needs to sort its culture out – is that it’s tricky to pin down exactly what you mean.  Ask most people what organisational culture means and you’ll get answers like: “well, it’s the way we do things” or “it’s the stuff that we do that makes us, well, us.”   Not particularly helpful if you are trying to think through how to move your organisation in a new direction. 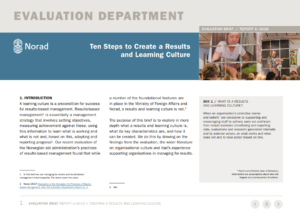 a learning culture, Itad and the Norad Evaluation Department wrote a short paper that drew on the wider literature on organisation change and explored in more depth what a ‘results and learning culture’ is and how the aid administration can create one.

Given the fairly squidgy explanations people give of what culture is, our starting point was a definition of what we understand as a learning culture: the collective norms and beliefs in an organisation that support and encourage staff to actively seek out and learn from evidence generated internally and by external actors, on what works and what does not and to take action based on this.  By collective norms we mean the informal rules of behaviour in an organisation; beliefs are the assumptions of what will happen as a consequence of actions.

We then had a go at describing the behaviours and practices that you’d likely observe if a learning culture was present in an organisation.  We boiled it down to four things you’d see individuals and teams at different levels of the organisation doing:

We then identified some of the practical steps that can be taken to nudge an organisation’s culture towards one that embraces learning – recognising that none provide a quick fix.

We group these under four headings: vision, leadership, incentives and capabilities.  You’ll need to read the whole paper for the details, but our main argument under each is:

While we didn’t go into detail about this in the paper, to change culture, in addition to the above, you also need to build momentum and enthusiasm for results and learning from the bottom up. We’ve found from experience that a good approach is to work with teams that are enthusiastic about learning from evidence and want to do it better. Support them, get them to a good place and then use their experience to showcase the value of a results focus and learning to others – or even better get them to showcase their experience to others.  Behaviours are heavily influenced by our perceptions of our peers, so peer advocacy is surprisingly effective!

Cultural change is messy.  It doesn’t lend itself to grand plans and big bang reform efforts. It’s gradual and iterative.  But through a combination of top-down interventions such as leadership signalling that demonstrating results and learning from evidence are important and bottom-up efforts such as enthusiastic teams showing what value evidence-based learning generates to peers, slowly but surely, the norms and beliefs of an organization can be shifted.

Read the full report and our briefing paper here.

There is a clear political commitment to measuring and managing for results in the Norwegian aid administration. Despite this commitment however...

Results-based management (RBM) is a management strategy. It involves setting objectives, measuring achievement against these, using this...