Gender Equality: what’s in it for men?

Itad's Julia Hamaus reflects on V4C's 'Being a Man in Nigeria: Perceptions and Realities' launch in London, and men's engagement with gender equality.

When we talk about gender equality, aren’t we talking about women’s participation and empowerment? So why work with men? Involving men and boys in programmes on gender equality is something that has been overlooked for many years, but there is increasing evidence that in order to address gender inequality effectively, men have to become part of the debate and take up an active role in modelling positive gender attitudes and behaviours.

There are now more and more initiatives to involve men and boys for gender equality and together these efforts are generating momentum for change. The global HeforShe campaign, initiated by UN Women, has sparked activism around the world. Itad has joined the HeforShe campaign and committed to strengthen our focus on gender. Programmes like Voices for Change1 (V4C) where Itad is a core partner, and Engendering Men: Evidence on Routes to Gender Equality (EMERGE)2 are championing the approach of involving men and boys for gender equality, generating key lessons on what works. 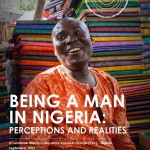 I had the opportunity to reflect on the role men and boys can play in promoting gender equality at last week’s UK launch of ‘Being a man in Nigeria: Perceptions and Realities’, a ground breaking publication of the V4C programme. The overall goal of V4C’s landmark research is “to have an informed and shared understanding of how the notion of ‘manhood’ or ‘masculinity’ influences and limit men’s perceptions, practices and attitudes. Particularly as it relates to violence against women and gender equality in order to design and implement programmes and policy that that will create equality and equity in Nigeria.”

The findings of ‘Being a man in Nigeria: Perceptions and Realities’ derive from qualitative and quantitative studies in selected states of six geographical regions in Nigeria. It is evident that many challenges persist:

However, there is also evidence for change:

The research also shows that there are contradictory views. While men are generally viewed as ‘natural’ leaders, most men (and women) believe that women can be equally effective leaders. Most participants of the research also thought that it was right for women to aspire to and occupy top positions in government and society, but at the same time felt that women should focus their time and energy taking care of their children and husbands and not get involved in politics. What are the reasons for these discrepancies? Is it important to hold on to traditional values while seeing benefits in emerging realities?

Patience Ekeoba, V4C lead on research and evidence, emphasised that it is important to look beyond perceptions and shed light on the realities many men live because of social norms that confine them to being brave, confident, and strong. As soon as a man does not fit into this pattern, he is not perceived as a ‘real’ man. It is often those very social expectations and pressures that trigger discriminatory practices, violence against women, as well as behaviours that harm men themselves, such as engaging in risky activities and alcohol abuse.

So what’s in it for men? Do they want to get rid of these social expectations and pressures that can be harmful to men as they are to women? Can this be reconciled with a loss of power? V4C’s team leader, Caroline Enye, explained that we have to push the right buttons to enable this change. “Whatever it is that presses your buttons we’ll use to promote change.” Gender stereotypes are modelled at home, on TV, at work, in public and political spaces. People continuously reproduce what they know about men and women, what others think about men and women, and what they think others expect them to think about men and women. V4C is attempting to model positive behaviour through a social marketing approach, promoting alternative images of what it means to be a man in Nigeria, encouraging positive role models and highlighting the benefits of more gender equal behaviour to men and women.

We also have to start thinking about which buttons to press to transform gendered institutions, public and political spaces that perpetuate inequalities and augment pressure on individuals to conform. Discriminatory practices, gender unequal organisational cultures and structures may persist even if individuals change. Patrick Welsh, who works on involving men and boys for gender equality in Nicaragua and who actively supports the V4C research, stressed the importance of getting out of the micro universe and strive for change at a higher level. This is why the social norms approach of the V4C programme is providing a new perspective and may generate opportunities for better relationships, happier and healthier realities for women and men.

Through Itad’s support to V4C’s M&E system we have taken an active role in measuring the programme’s achievements in changing social norms. This gives us the opportunity to gain an in-depth understanding of how women, girls, men and boys are changing their views in favour of more equitable gender beliefs and practices and will enable us to draw out learning on effective approaches to promoting gender equality, which can be used in future programming and policy-making.

V4C (Voices for Change) was an ambitious, innovative gender programme, which sought to address the global challenge of empowering adolescent...