Accountability and protection: two sides of the same coin – Lessons from DFID’s accountability programming in the Philippines

This blog is written by Mary Ann Brocklesby and Katie Tong, who were team members on the recent Itad evaluation of DFID’s humanitarian response to Typhoon Haiyan in the Philippines.

Accountability to affected populations (AAP) is one of three relatively newly emerging and interlinked cross-cutting areas of humanitarian work, together with Communicating with Communities (CwC) and Prevention of Sexual Exploitation and Abuse (PSEA). In this blog, we look at some of the lessons learnt during our work as independent evaluators of DFID’s response to Typhoon Haiyan in the Philippines. We explore what these lessons tell us about accountability and protection programming for future disaster responses; why it doesn’t make sense to divorce protection from accountability; and how these lessons are currently being applied in Nepal. 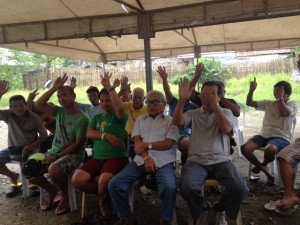 When Typhoon Haiyan (known locally as ‘Yolanda’) struck the Philippines on November 8 2013, more than 16 million people were affected and over four million displaced. The disaster generated a global humanitarian response, with the UN declaring a Level 3 (highest level) emergency and activating the 2011 Transformative Agenda protocols for the first time. Haiyan was the first emergency response to have a major focus on both accountability and protection, especially violence against women and girls (VAWG).

So what did we learn from the Haiyan response? Unfortunately, accountability and protection programming was not improved to the extent that it translated into measurably improved outcomes for aid recipients. However, there were some key lessons that emerged for future response.

The use of SADD in humanitarian response is not just a question of good practice. The lack of it undermines progress towards socially-inclusive aid distribution and risks increasing the comparative vulnerability of certain groups, especially women and girls. Yet in Haiyan, agencies collectively failed to gather SADD in a consistent or useful manner. For accountability, the timely availability of SADD would have supported improved targeting and inclusion, as well as better decision-making on the transition to recovery. It may also have helped overcome some of the well-documented frustrations affected communities had with the way aid was targeted and distributed during recovery.

This raises the question of when, if ever, SADD will be collected if it cannot be managed in the Philippines context – a middle-income country with the infrastructure, lack of insecurity, and high levels of education that should have allowed SADD to be collected quickly and relatively easily. The failure to utilise SADD within this most enabling of environments might suggest that the failure stems from a systemic collective apathy towards the idea rather than any major operational challenge.

2.       Engaging people in accountability processes matters more than targeting by externally-set categories. In the Haiyan response, all DFID’s partner agencies prioritised designated vulnerable groups and developed mechanisms to identify and target vulnerable households within communities. However, evaluation data showed that who was vulnerable was more nuanced and differed across communities, and as a result, certain groups were often overlooked. For example, we met with women who were excluded from recovery projects because they received remittances from abroad (a standard exclusion criteria), but the reality was that their husbands were working in jobs, such as construction in Qatar, that earned barely enough to cover their own basic needs.

Community members reported limited discussions with response agencies about who within their own community was vulnerable and why. They felt there had been too few opportunities to air their views and make suggestions – consultations had started too late to inspire confidence that agencies were listening to them and adjusting projects in the light of feedback. Their overall message was clear: greater consistency and transparency was needed across the whole response in reaching vulnerable groups.

3.       Haiyan once again demonstrated that context and timing matter. In terms of context, the agencies most effective at protection and accountability programming in the Haiyan response invested in understanding who to work with locally and worked with them to reach everyone in affected communities, especially vulnerable and marginalised people. In terms of timing, one of the main lessons from Haiyan is that the different phases of a response require different types of accountability and protection mechanisms and tools, and that these all need to be planned for as part of disaster preparedness. Some examples highlighted to us in interviews include:

Whilst the Haiyan response highlighted a number of challenges that remain within the international humanitarian system, there were also examples of good practice. For example, significant progress was made in programming common services through different forums. What was different and important in this response was the widespread recognition that steps were needed, however imperfect, to progress a common approach to accountability both within the Philippines and globally. Nine months after the Typhoon, Pamati Kita (‘let’s listen together’) – a DFID-funded common services AAP pilot project led by Plan International – was started, which established a broad base of local organisations and government agencies. Although it was not necessarily the strongest of interventions, it was the first time a common approach had been attempted in regard to AAP functionality and mechanisms at a ground level, and thus provided useful learning for future disasters.

Another example is the AAP working group, initiated by OCHA in November 2013 bringing together CwC and AAP personnel to coordinate and harmonise agency communication approaches. The group trained participating organisations on cash for work (CfW) and the use of accountability tools, and coordinated agency responses to targeting, feedback and messaging. One of the strengths of the working group was its ability to build a common understanding between agencies about the interdependence of CwC and AAP mechanisms in promoting better accountability outcomes. The working group remains active in the Tacloban area and on Panay Island hubs. Unlike the clusters, it evolved to include the active participation of local NGOs and became an established community of practice. It has also become a vehicle for coordinating AAP mechanisms and embedding emerging lessons into national structures for disaster risk reduction and management. The group was widely praised for its rapid response to the onset of Typhoon Hagupit (Ruby) in December 2014 and is now providing a model for future disaster responses within the Philippines and globally.

Epilogue: Nepal 2015 – to what extent have these lessons been taken on board?

On April 25 2015, Nepal suffered a devastating 7.8-magnitude earthquake, followed by hundreds of aftershocks including one of a magnitude of 7.4 on May 12, leaving millions of people struggling to survive. Even though a number of the same issues were encountered in the Nepal response, such as protection funding being much lower than required (although this was also true for other sectors) and SADD data being significantly delayed, what was notable was that within a month of the earthquake a Common Feedback Project, similar to the Philippines Pamati Kita project, was established by DFID. Given that this was established so quickly, and that it was led – quite rightly – by OCHA and so from its inception had a level of authority and credibility that Pamati Kita struggled to reach, shows a remarkable improvement on the Haiyan response and hope for greater accountability in future disasters. And greater accountability links directly to greater protection – two sides of the same coin.

Emergency responses can never be perfect, and it is unhelpful to measure them against any theoretical idea of what a ‘good’ response looks like. The only realistic measurement is whether we have learnt from our previous experiences, and changed the way we do things based on that learning. Initial evidence from Nepal suggests that, in relation to accountability and protection, perhaps we have.