I was watching the launch of the Global Health 50/50 Report at UCL recently, and as we had also just celebrated International Women’s Day, a question sprung to mind: and what about the men?

The report, the first of its kind, presents the findings from a comprehensive review of the extent to which gender equality concerns are integrated into the policies and operations of 140 organisations working in and/or influencing the field of Global Health. The sample is made up of 18 Public-Private Partnerships, 7 UN agencies, 13 bilateral and multilateral development partners, 12 philanthropic organisations and foundations, 40 global Civil Society Organisations and NGOs, 44 private sector firms and 6 international consultancy firms.

The picture painted by the report is somewhat alarming. While gender equality has apparently been embraced as a priority in Global Health, very few organisations seem to ‘walk the talk’. What struck me the most of all the findings presented, and from the interventions of the different panellists (including representatives of The Lancet, the Wellcome Trust, Save the Children, Mott MacDonald and DFID), was the absence of men in the discourse and practice of various organisations working in Global Health.

Despite the fact that gender disparities in behaviour and lifestyles across the world mean that the global burden of disease falls disproportionately on men, who have a shorter life expectancy than women in virtually all countries on the planet[1], no organisations in the NGO sample of the study, for example, seems to focus exclusively on the health of men and boys as part of their work, while the majority focus on both genders and a good number of women and girls alone (see picture below taken from the Global Health 50/50 Report). 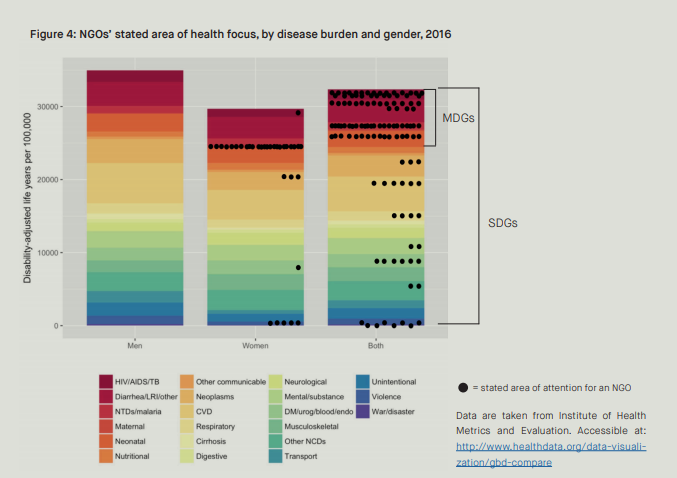 While it makes perfect sense to focus on women and girls as they have traditionally been, and still are, disadvantaged in a number of spheres of life, including in relation to health (adolescent girls, for example) account for a disproportionate number of new HIV infections[2] and the risks and burden of childbearing and birth obviously affect women rather than men), all too often ‘gender’ is equated to ‘women’, while men (and people with non-binary gender identities) are neglected both as right holders and as duty bearers. Out of the 140 organisations examined in the report, for example, only 34% seem to commit to gender equality to benefit all people, while 21% do so to benefit women and girls and the rest are silent about the issue.

Investing in men’s health and wellbeing and including men as critical actors in efforts that aim at improving those of women would benefit everyone. Firstly, it would broaden support for gender equality by clarifying in everybody’s mind once and for all that every person has a gender and that gender does not equate to ‘women’s issues’; everyone has something to gain from it. Secondly, it would help close what the WHO has called the “men’s health gap”[3] by challenging notions of masculinity that underpin men’s behaviours such as excessive drinking or unprotected sexual interactions and gender differentials such as men being overrepresented in professions that involve a higher risk to one’s health. Thirdly, involving men in initiatives that focus on women’s health and wellbeing is critical for such initiatives to succeed, as in many instances decisions that have an impact on women’s health (such as for example whether to use contraceptives and which type or whether to seek medical help) are taken by or with men.

Adopting a truly gender transformative approach would entail going beyond a focus on women and girls, without diminishing efforts to improve women’s health, and start exploring and challenging the gendered-relations and behaviours that are behind what we witness in terms of disease burden across the world today. Some organisations are already pioneering the way but all actors who are serious about achieving true gender equality and better health outcomes for everyone should embrace this mindset.

For a recording of the event https://www.youtube.com/watch?v=olyCTOlg_s4

[1] Global Burden of Disease Study 2016 by the Institute for Health Metrics and Evaluation (IHME). Available online at http://www.healthdata.org/gbd